The tone the last few posts brings described the state where the writer is too sane to be called depressed, but too ’empty’ to do anything other that just passing the day. Something like written in this post, this one or this one.

A feeling when there is nothing wrong outside yet it feels so tense inside.

Bumped into a New York Times article written by Adam Grant, then it’s such a relief that what happened inside has a name.

It’s the void between depression and flourishing — the absence of well-being. You don’t have symptoms of mental illness, but you’re not the picture of mental health either. You’re not functioning at full capacity.

There were times it felt like PMS yet the hollow feeling stayed even after the period ended.

It was confusing and it wasn’t easy to tell others how it felt when you didn’t really understand too what this kind of emotion inside.

There were times when I kept questioning my self, “Does it really and only exist in my head?”

Turned out it doesn’t. 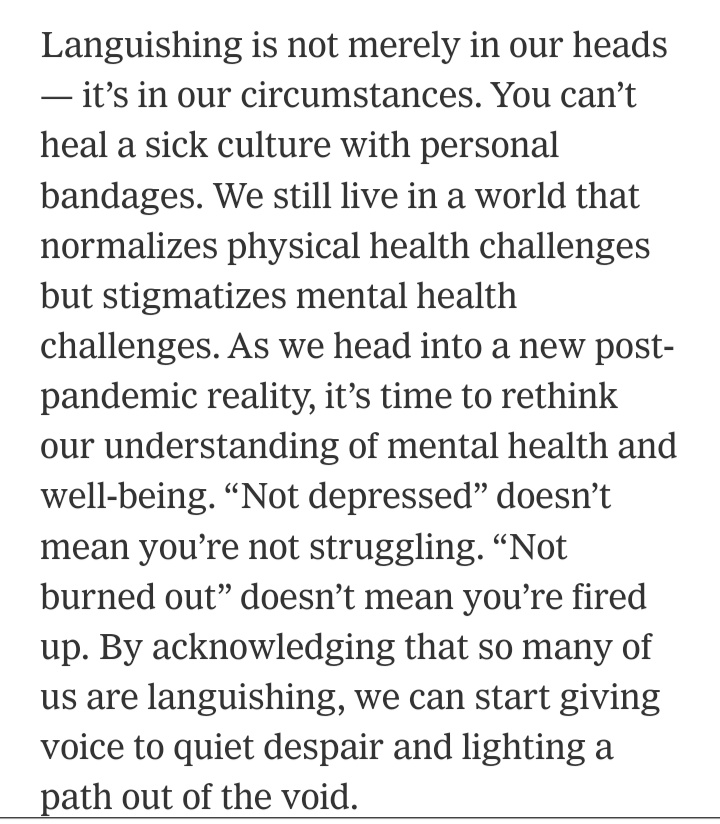 Been doing what can be done to deal with this feeling. Things that similar to what the article suggested.

Let see how it goes.

But, at least now I can answer the question “How are you?” more accurately than “good” or “hm, not sure”.

A full article about Languishing here.